In: Behind the Scenes, Guides and Tips, Review
With: 0 Comments
Even though I should totally know better by now, I am always trying out new stuff on my hair, trying to get those perfect glossy curls so many vintage gals seem to get with almost no effort. I can set semi-decent pincurls, I can do a horrible mess on my hair with rag curls, I can make a dog’s breakfast of those bendy sponge roll-things.
Velcro curlers haven’t touched my hair since I was a teenager, and when I do reach for curlers I prefer those iron ones, because I can sleep in them almost decently, and I have plenty of practice. Most of the time they even turn out just how I want them.
But wait, I said. What if… this thing? 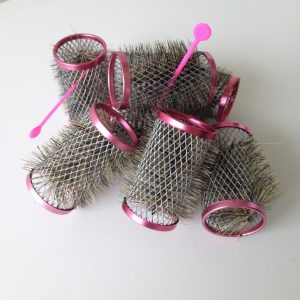 Yes, what if I tried these strange mesh curlers that look like they have bottle scrubbers inside of them? I mean, I know one of my nan’s used them, and they look kind of handy, definitely like maybe less work than the iron curlers. I am certain I could get a good curl with them.  You can already kind of see where this is going, right?
They were fairly easy to set, because they hold the tip nicely, especially when damp, so you don’t have to pay as much attention to curling the tip as tidily as you do with pincurls or any other type of curlers (except the Velcro ones, and we do.not.talk.about.those). This was definitely a bonus, and i was done relatively fast. But that is when certain problems arose.

Now, I have grown up being a lab rat for my hairstylist mother who would test all kinds of new techniques and products on my hair. Some smelled, (ok a lot of them smelled), some itched a bit (I’m looking at you bleach), and some…well, let’s not get into those. But nothing itched and pricked as much as these did. Granted, the idea of going to sleep in them was a rather stupid one, so that test run was abandoned quickly, and having them in my hair while I was awake and still moving about was a rather prickly and itchy experience also, which had me reaching for the teasing comb to scratch like a madwoman  gently adjust the curlers, which I seriously doubt helped my curls setting.

But see, this is where I made the crucial mistake: I left them to set through natural air flow, like I usually do with my pincurls and iron curlers.  These are definitely not to be used that way, which I kind of remembered, about 2 hours into the drying period. I also conveniently remembered the one other thing I need for them. Next time I’m near a hair salon supplies shop I will pick up one of those small hoods that attaches to your regular hair dryer and just sit there patiently for some 30-40 minutes while the curlers and the hot air do their thing. I am certain that that will be the perfect winning combination, even though this result isn’t that bad either. 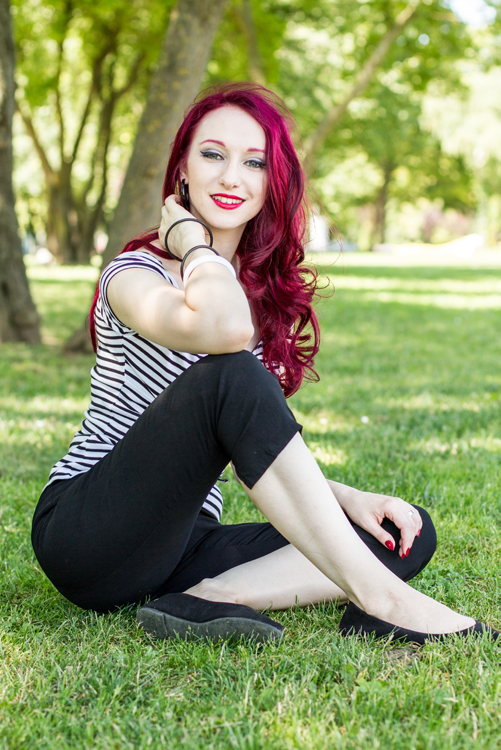 This photo was taken after the hair already went through two other  hairstyles for the shootings which we did, so it was brushed at least twice, and endured some windy weather. As you can see, the curls hold very nicely, so I think I’ll be giving my little itchy monsters another chance!
As soon as I get that stylish hood that is.
Until next time!
xoxo
Shoot was done for Rockabilly Pinup
Photo by VillyV
2016-11-08
Previous Post: The Belsira Bikini one
Next Post: Owl Dress from Rockabilly Pinup

VenusMantrap is a lover of all things vintage and pinup, with a special place in her heart for the dark and dramatic side of life. She is always ready for new and exciting adventures, so feel free to contact her for any cooperation inquiries using the contact form. She welcomes new artistic adventures, cooperations and creative challenges.